“Bill Bowerman” by Fabio Sola Penna is licensed under CC BY 2.0

A quiet, intense, persuasive man with a wry smile. To the sports world, Bill Bowerman was a legendary coach and innovator whose emphasis on biomechanics and physiological training helped popularize long distance running.

But his contributions as a Nike co-founder extend far past Eugene. His tinkering, competitive mindset revolutionized a community with culture. A gritty drive that innovated running shoes when he poured homemade rubber into his wife’s waffle iron—all in an attempt to shave off a few tenths and pounds for his athletes.

In 1929, a young Bowerman enrolled at the University of Oregon to study journalism and play football and basketball. While during his final two years, he became involved with the track team as a quarter-miler. And upon graduation in 1934, promptly gained accepted to medical school.

But instead, he got his start as the track and football coach at Medford High School. Then, after a stint as an Army officer during World War II, he left for a collegiate coaching career at his alma mater.

He was a born teacher, yet driven by impish urges to unnerve and confound both friend and foe.

In the two-plus decades that followed, Bowerman shaped the careers of many of the world’s best distance and middle-distance runners. Building the University of Oregon into “Tracktown USA” with world-class athletes like Steve Prefontaine and Alberto Salazar. His teams won four National Collegiate Athletic Association (NCAA) track and field championships. While he coached 44 all-Americans, 19 Olympians, and future head coach Bill Dellinger.

Bowerman’s training program was to treat his athletes with individualized precision, and he was known for his innovative training methods. He stressed recovery with running long distances at a slow pace, with great form. And he was an early proponent of interval training. He also thought that athletic shoes should be lightweight and flexible.

Running shoes from a waffle iron

In a 1960 Sports Illustrated profile of Bowerman, he was quoted as saying,

While the article described a hacked together thing of passionate beauty:

The Bowerman shoe, which he cuts and sews himself to fit the athlete, is a combination of scraps of leather, elastic, and canvas, which weighs only about four ounces, as against 6½ ounces for the ordinary shoe. Bowerman figures that if he cuts the weight of the shoe an ounce, he’s saving the runner from lifting approximately 200 pounds in a mile race, depending upon the runner’s stride.”

As legend has it, Bowerman was sitting down to breakfast with his wife when it dawned on him. The waffle iron she was using would make an excellent mold for a running sole.

Inspired, he got up from the table and went tearing into his garage. He mixed two cans of urethane and poured the concoction into the waffle iron.

But the tiny appliance was so small; it could only make one waffle at a time. Which meant Bowerman had to cook each rubber sole twice to make a pair. And then glue each sole to nylon uppers for custom-made shoes.

According to reports, as Hayward Field was transitioning to an artificial surface, Bowerman was actively searching for a means to make his athlete’s performance lighter and faster.

“Bill wanted a sole without spikes that could grip equally well on grass or bark dust.”

And the performance innovation began as a collaboration with Japanese manufacturer Onitsuka Tiger. But in 1972, they introduced the Nike Cortez, the world’s first athletic shoe designed specifically for running. Nike was officially born.

The Nike Cortez was one of the first running shoes ever made. It was minimalistic, lightweight, and had a simple rubber sole. (The term “Cortez” refers to the Spanish conquistador Hernán Cortés.) 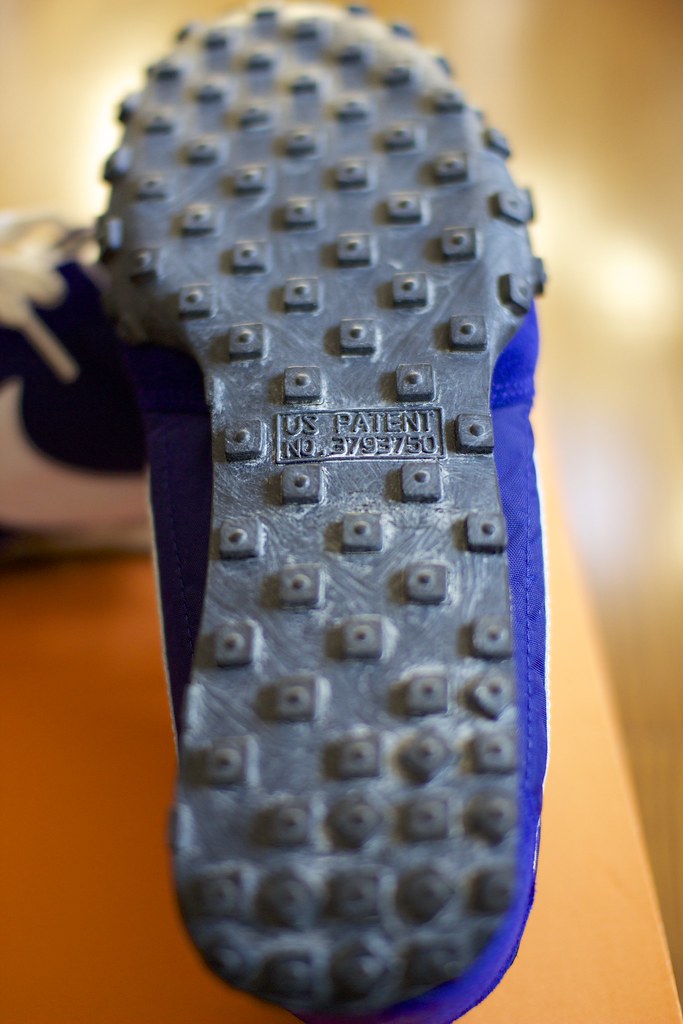 “NIKE WAFFLE RACER VINTAGE” by Kazuhiro Keino is licensed under CC BY 2.0

The iconic brand built upon its running background and swoosh logo to expand into popular culture with the slogan “Just do it.”

And with Tinker Hatfield (another Oregon man) fueling the next generation of shoe designers during the 1980s and 90s, it became a multibillion-dollar company. In large part to the global explosion of basketball, Michael Jordan, and sneakerheads the world over. And ambassadors like Tiger Woods opening up golf to the masses.

Today, the company is an aspirational brand of athletic apparel. Sold worldwide through a network of subsidiaries in Europe, Asia, and North America. And its artistic appeal is popular among professional athletes, aspirational weekend warriors, and traditional sports enthusiasts. Continuing its mission “To bring inspiration and innovation to every athlete in the world.” Deontay Wilder, the now former WBC heavyweight champion, is no stranger to being knocked down. After all, he…